Posted on May 28, 2016 by Brenda Piquette | Continual Threshold

Attention: Mind and universe blowing subject matter. Physicists suspect that when the Big Bang created our universe 14 billion years ago, it may also have birthed an inverse, mirror universe where time moves backwards, not forwards. When we examine this scientific proposition, we discover a shared structure between chakras, people and the multiverse.

Two separate teams of physicists have proposed that the Big Bang might have created, not only our universe but also a second, inverse universe where time moves backwards instead of forwards. Time in that mirror universe would move from the future to the past – which can be hard for us in the past-to-future universe to grasp.

Structure of the Observable Universe 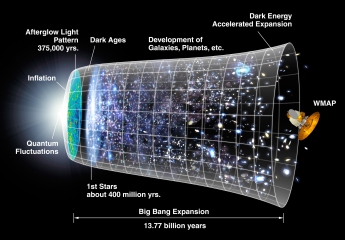 The image on the left shows a diagram of our current understanding of the evolution of the observable universe from the Big Bang on the left to today on the right.

Time in our universe moves, in this image, from left – the beginning of the Big Bang – to the right.

Physicists were studying entropy to help them to determine the direction in which time flows. I won’t get into all the nitty gritty about entropy or this experiment (about which you can read in the Science Alert article listed under Sources); let’s just say that their experiment with particles looked like the image on the right.

What they found was that, right after the Big Bang, matter and trapped energy were probably still clustered together (low entropy or less disorder). As time passed or moved forward, matter and energy spread out increasing entropy (greater disorder).

What physicists are proposing is that, when our universe was created during the Big Bang, another, identical universe sprouted on the other side of ours. However, in this universe, time moves in the other direction, from the future to the past, at least from our perspective.

Structure & Function of the Chakras

On the right is a side view of our seven major chakras from the Root to the Crown. The structure of a major chakra or energy centre is very similar to that of the two universes above: a funnel-like shape on either side of a smaller, central region.

Our chakras are energy/information sensors and processors. Each chakra is responsible for sensing, receiving, processing and sharing different types of information.

The Sacral, Solar Plexus, Heart, Throat and Brow chakras all have a front and a back funnel-shaped part.

The front funnel of our chakras connects us to our physical world. They sense and receive all of the energy/information from the world around us, process that information then distribute it within us.

The front chakras also take all of the energy/information within us and send it out into the world.

On the other hand, the back part of our chakras focuses on our will and reason. They work to make things happen for us. They are the source of our potential, our creative energy. Some may call this our spiritual aspect or our consciousness.

The front and back parts of the chakras are similar to renown physicist David Bohm’s explicate and implicate universes:

The centre of each chakra is a point of creation and transformation; it is a bridge that connects the two sides. The centre of each chakra, located on our spine for all but the crown chakra, is a hub that connects the chakras and facilitates the flow of energy/information between the chakras. When energy flows freely, the middle of the chakra is a place of creation and transformation—like a hub that brings different people together to network and to come up with fresh, new ideas.

So… what does all that have to do with entropy and time? 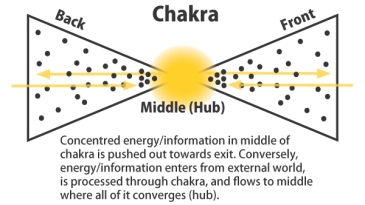 Energy/information in a chakra (see image on left) may converge in the middle section, the hub or bridge—the area of creation/transformation—before being pushed into either the back or the front chakra.

When it is moving from the middle through the front chakra (that works with the physical world), energy/information moves from the past to the present, towards the future.

When it is moving from the middle to the back chakra (that works with potential, consciousness or the spiritual), energy/information moves from the future to the present, towards the past. Time might flow backwards here because potential is always in the past; when potential is anything other than potential, it has transformed and can only be found in the future.

Similar to chakras that have a front, funnel-shaped area focused on the physical/explicit, could our universe be the physical/explicit aspect of two inverse universes? If a mirror universe exists, does it represent the back of the chakra, the implicit level of existence, the potential from which our own universe draws?

Do these two mirror universes complement each other with countless, continuous enfoldings and unfoldings between the two, from the potential/spiritual/consciousness to the physical, and vice versa? Perhaps energy/information is never lost because it is continually looped between these two inverse universes.

If we look at the image of the major chakras above, the red root chakra at the bottom is the inverse of the violet crown chakra at the top. The root represents the most basic of our physical needs and the crown symbolizes our highest spiritual needs. The heart is the bridge in the middle of all of the chakras, and a centre of creation and transformation for our person.

The structure of our body and being, of our universe and of our multiverse may be but mirrors of each other. I am continually fascinated with how much I learn by exploring and by comparing their structures, roles and functions.

At Continual Threshold, we offer quick and easy, compassionate, self-directed healing tools that you can adapt for your needs and integrate into your daily life to heal and to grow as a person.
View all posts by Brenda Piquette | Continual Threshold →
This entry was posted in Astrophysics, Physics, Uncategorized and tagged Big Bang, Chakras, energy, entropy, information, multiverse, time, universe. Bookmark the permalink.