Gravity is Love. Love is Gravity.

With that formula, we can measure the gravitational force that the Sun has on the Earth. The Sun’s huge mass and close proximity produces a gravitational force strong enough to pull Earth and all of the other planets in the solar system towards it so that they orbit the star.

Even though the Sun’s gravity is many times stronger than Earth’s, people and animals are not flying out into space to orbit the sun because Earth is much closer to us than the Sun and our mass is puny compared to that of our home planet.

Similarly, we can measure the gravitational pull the Moon and Earth have on each other. The Earth’s larger mass means that the Moon will orbit the Earth.

However, the Moon’s gravitational force does have an influence on Earth: it tugs at the tides in our oceans creating high and low tides.

Gravity is everywhere in our universe because there are objects spread throughout space. The gravity of suns pulls planets and, sometimes, smaller suns into their orbits. Entire galaxies exert a tremendous gravitational force that can attract smaller galaxies around them.

The Milky Way is the blue dot at the right edge of Laniakea in the image above. The white filaments indicate the motion of the galaxies towards the centre of the supercluster, the Great Attractor, the area where all the filaments intersect.

Here is a wonderful, short video about Laniakea and our place in it:

Like gravity, unconditional love is an attractive force that can be measured—although not with a mathematical formula, at least not yet. 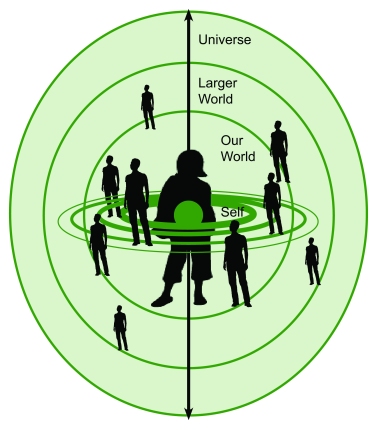 Some well-known people with big, open hearts who attract or attracted thousands and millions of people include Martin Luther King, Nelson Mandela, Amma Mata Amritanandamayi and Buddha. Millions of everyday people are loving and compassionate and attract others; I can think of a few in my circle and I’m sure you can too.

When we talk about the size and the openness of a heart, we are not talking about its physiological characteristics. Rather, we can measure the ‘mass’ and ‘distance’ of a heart by its influence on the world around it.

The people with big hearts who we know personally have a strong, positive influence within their families and communities. We can compare them to our small Local Group mentioned above that contains just a handful of galaxies. On the other hand, a person like Nelson Mandela had a very strong, positive influence on millions of people in South Africa and all over the world. We could compare people like him to a supercluster with a gravitational reach of thousands and even millions of galaxies.

Someday, we will find a way to measure the force of unconditional love, perhaps by measuring the physiological, electromagnetic reach of our heart as well as by defining criteria for the reach of our good deeds, thoughts and ideas in the world around us.

If we take a look around us, we can already measure the push and pull of our personal tides by observing the people, animals, objects and places around us.

All objects, big or small, have a gravitational force that influences other objects within reach.

Unconditional love defines our person and our world.

All people have an attractive force that influences other people and objects within reach.

At Continual Threshold, we offer quick and easy, compassionate, self-directed healing tools that you can adapt for your needs and integrate into your daily life to heal and to grow as a person.
View all posts by Brenda Piquette | Continual Threshold →
This entry was posted in Astrophysics, Magnetic Fields and tagged Cluster, Distance, Galaxy, Gravitational force, Gravity, heart, Love, Mass, Supercluster, Unconditional love. Bookmark the permalink.

1 Response to Gravity is Love. Love is Gravity.